I saw a media article today about Telstra demonstrating one gigabit LTE and claiming this was somehow superior to the NBN. I can’t let a claim like that go unchallenged.

First, some history. In the early days of analogue mobile phones (AMPS) operators broke their radio spectrum into 21 blocks of voice channels and designed their networks to services “cells” from three“base stations” connected to antennas with overlapping coverage on three towers or buildings.

Every cell could see one to three towers and this allowed for a “handoff” between towers. There was no data service. Every call required a channel and that channel would have little interfere from another call on the same frequency in a distant cell.

I found a picture that illustrates this:

The frequency reuse factor, k = 21 for this scheme. So you can use no more than 1/21 of the spectrum you bought in any one cell. By the end of AMPS carriers had dropped k to 7 at the expense of more interference but it improved the commercial yield on their spectrum investment by a factor of three. The CFO loved that.

GSM, being digital, improved things such that nine or twelve sets of channels of digital data could form cells in a similar manner. Frequencies can be reused much more readily and the overlap doesn’t need to be so large. 114kbps data services can be delivered via this architecture from 200KHz data channels in 25MHz blocks. (You need 2 x 25MHz blocks, one for data UP and one for date DOWN.) You still need _relatively_ low interference so ironically this can work BETTER in a built up area where buildings block the interference. Combining two channels doubles the data rate and that is the service known as EDGE. 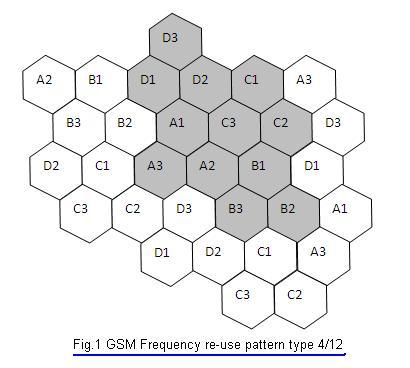 The reuse factor, k = 12 for this scheme so you can use 1/12 of the spectrum you bought to service customers in any cell. In practice this meant you could service 124 channels / 12 = ~12 X 114kbps or a bit over a megabit from each sector of your base station. This is why mobile tower backhaul was only 2 megabits! 2 megabits for an entire tower with three cells but given the theoretical maximum data was 124 / 4 = 31 X 114 = 4.4Mbps it wasn’t a bad contention ratio.

3G introduced “spreading codes” or code division multiple access aka CDMA which encode data on a radio carrier by multiplying it by a random digital number at a much higher bitrate than the data. To decode a specific data stream you multiply the received signal by the same random digital number and get the original data back. It’s like black math magic but it works! 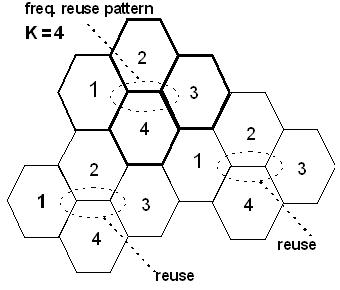 Data is transmitted on the entire 5MHz channel in frames that are 10ms long with 15 slots that contain data and control information directed towards users.

The 3G UMTS standard delivers 15 x 384Kbps data slots to the users in each cell. That’s a total of 5.8Mbps which was quite a thing from 5MHz of spectrum at the time.

HSDPA increases that to 7.2Mbps per user largely by squeezing more out of the 5MHz of spectrum  and joining a bunch of data slots together. Over the life of UMTS the modulation rate has been increased to get THREE times more bits out of the spectrum and to use spectrum from TWO towers so the pinnacle of 3G is DC-HSPA (Dual Channel / Dual Carrier HSPA) which is 42Mbps (six times the basic 7 Mbps service). That 7, 14, 21 or 42Mbps is shared by every user within a cell.

LTE is the logical evolution and convergence of these technologies.

Cell towers traditionally use three antennas per sector. Originally the strongest received signal from each user was selected. Then some beam steering was added to concentrate the signal to and from each user. This is called Multiple In and Multiple Out (MIMO). In LTE this beam steering is done for every user UP and DOWN continuously.

The available spectrum is broken into numerous 180KHz channels (called resource blocks) with the maximum allocation being 100 blocks over 20MHz. These resource blocks are in turn modulated on subcarriers using orthogonal frequency division multiplexing which is rather like vectoring on VDSL2. It’s high-tech and it can carry 1 megabit over 180KHz which was theoretically impossible when I went to school but yields 100Mbps over 20MHz.

Together with MIMO,  LTE’s modulation technique you can set k = 1 i.e. you can use the same block of frequencies everywhere.

That’s “LTE”, a hundred megabits more or less shared by all the users receiving their service from a given sector (or cell) on a given tower.

What if you had lots of money and could buy lots of spectrum? Well you would find 5 lots of 20MHz blocks of spectrum and send the data in parallel over 500 resource blocks at once. That’s known as “LTE Advanced Cat15” and it delivers a gigabit shared by all the users receiving their service from a given sector (or cell) on a given tower.

Is this enough to scare NBNCo?

No! Because even using fibre to the node NBNCo can deliver a separate 100 megabits to each and every house served by a sector on a tower, potentially hundreds of houses, which would be tens of gigabits.

LTE off mobile towers and roof tops isn’t going to put the NBNCo out of business just yet.

What if you could make your cells quite small? What if they were mounted on power poles or on top of NBN Nodes, if you happened to own them?

Well that’s something that should scare NBNCo and I think it’s one of the NBN defeating or eating endgame options Telstra have in their kit bag.

BUT, all those basestations serving all those cells need backhaul and that needs gobs of fibre. Physically small LTE basestations will emerge as a fibre to the node or distribution point technology but at the same time fibre will always be able to drop infinite bandwidth to individual end users. This suggests that fibre to the premises will inevitably return to favour as bandwidth demands keep spiralling up.

In the mean time mobility is the killer app and the mobile operators can charge a premium for it. LTE is going to satisfy low volume users but the price will be prohibitive for hundreds of gigabytes per month. That said, they are the very users NBNCo is counting on to cross subsidise the roll out.

We live in interesting times.