Let me start by warning that this isn’t investment advice.

I found an interesting graph at the end of a Finder.com.au article on mobile performance showing the falling cost per gigabyte of mobile data on what they described as flagship plans. I take that to mean approximately $50 per month which has been the popular Australian price point for Telstra SIM only mobile services.

It reminded me of  how Telstra’s share price has fallen over the three years since Telstra launched 4G.

I wondered what the mobile retail price is at April 2018 so I looked at Telstra’s current pricing which has fallen to $2 per GB. Internode sold it’s flagship ADSL2+ service with a 40GB quota for $80 in 2006.

Now it’s May and Telstra have announced “Unlimited*” (* 40 gigabyte limit with 1.5 megabit speed limit thereafter) mobile data. They are trying raise revenue from $50 to $70 with it but it’s still well under $2 per GB, continuing the downward trend. Sadly for Telstra TPG have rained on their parade by offering $10 for 1 gigabyte per day which adds new line to the graph at around $0.33 per GB which must have caused a few folks at Telstra, Optus and Vodafone distinctly painful weekends. 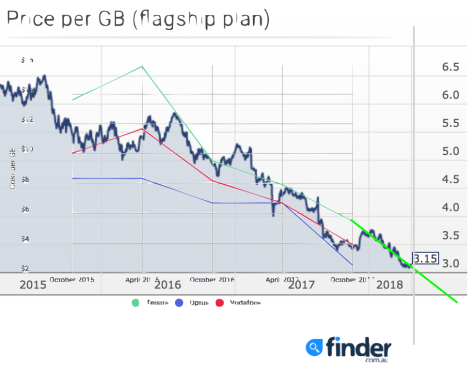 2016, 2017 and now 2018 show a remarkable correlation between Telstra’s share price (which can be a proxy for the investor view of Telstra’s future profits) and the “value” of Telstra’s flagship mobile product.

Why is there this correlation?

Telstra’s monthly average revenue per user (ARPU) for mobile and fixed line services remain largely unchanged in a decade so total revenue is directly a function of market share.

That leaves Telstra’s telco revenue at $26,650 million which is only 2.4% more than last year and in line with inflation. If “middle” means slightly less than middle, revenue could be $26 billion for the third year in a row.

I think we have to accept that Telstra’s revenue is flat. It has been for the last three years and unless the entire industry plays the drinking game and just happens to decide to raise retail prices at the same time we aren’t going to see a shift upwards.

Is it capex? Telstra are forecasting capital expenditure of around $4.8 billion dollars for FY18. Last year they said they would spend $15 billion over three years which is all being depreciated. The FY17 depreciation figure was $4.4 billion so every $1 of revenue costs $0.17 of capital investment write down. But this is actually fairly flat so it’s not driving down Telstra’s profit.

So why is there this correlation? Good old fashioned “operating expenses”. It’s expensive to pay NBNCo, all those people, all that electricity and all that A grade rent. It’s an expense that rose 5.8% in FY17 and has probably risen faster than inflation in FY18 too. This drives a  margin crunch and at some point Telstra are going to need to find dramatically cheaper ways of delivering $26 billion of services.

Some of this will need to come from lower capital expenditure but that isn’t going to happen in a world where Chinese vendors are being banned on national security grounds. The rest will need to come from operations and that’s going to be very hard for an organisation that still sees itself commanding a premium price for premium service.

It’s going to be super hard when everyone pays NBNCo the same fixed price for the same services. It’s going to force Telstra off NBNCo for lower speed, lower volume users and the “unlimited” wireless products are an early shot over NBNCo’s bow.

Maintaining mobile revenue is also going to be super hard for Telstra now that TPG have announced $10 per month mobile data plans.

Ah, but Telstra just need to grow the $26 billion revenue, you say. Go read this article from 2016. It’s all the stuff Telstra CEO Andy Penn promised would grow revenue from $26 billion in FY16.

Tabulating the subsequent write-downs and write-offs is left as an exercise for the reader.